Entering the land of smiles

Posted by colleen finn ⋅ May 2, 2010 ⋅ Leave a comment
Filed Under  Cambodia, sightseeing, Thailand 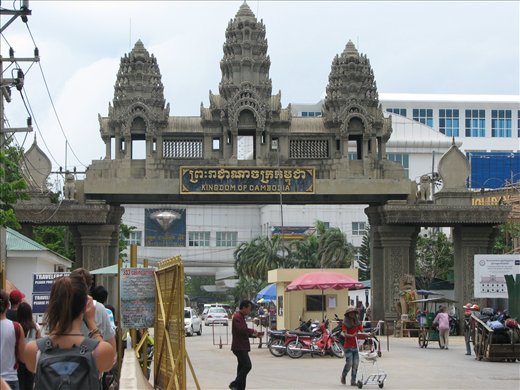 I never did make it to the night market. After asking around, I was advised that the area was too dangerous due to its proximity to an encampment, and since the local authoritites have been threatening a crackdown that could happen at any time, it would have been too risky. I also discovered that my guidebook was a bit misleading in regard to the market (read: quite dodgy), so I felt it was no great loss to give it a miss.

Today is a travel day out of Thailand and into Cambodia. The highway goes through a lot of countryside and I enjoy watching farmers in their wide-brimmed hats work their fields. The day is cooler than it’s been all week and occasional drops of rain splatter the bus’ windshield. The sides of the highway are occasionally lined with aged wooden fruit stands that display their colorful and succulent wares. “Buying local” is not something that people must make an effort to do out here; it’s simply how it’s done.

There is absolutely no question when you’ve crossed the Thailand/Cambodia border. It’s not just because the border crossing feels like an unusually tiresome, drawn-out process, but also because there’s such a marked contrast between the two countries. The immigration buildings on each side of the border are an apt example: whereas the building on the Thailand side is a relatively modern air-conditioned structure, the building on the Cambodian side is cramped, hastily built, and underventilated. The cement floor is cracked and the seams of the plywood walls don’t always meet evenly. Apparently, the builders thought it too much trouble to cut down a tree that grew on the site, so they simply built around the tree. Yes, this means there’s a tree trunk in the immigration building (that and a shrine to Buddha is all there is for decor). As everyone waited an achingly long time to be cleared through Cambodian immigration, the heavens opened up overhead and those few teasing drops of rain that followed us since Bangkok turned into a torrential downpour, complete with deafening sounds of rolling thunder and cracking lightning bolts. The ceiling of the Cambodian immigration building springs leaks in several areas, many near electrical cords that power the overworked fans. I get the impression they aren’t terribly concerned about liability here.

You don’t need a guidebook to tell you that Cambodia is a poorer country than Thailand. There’s more trash in the streets, more people begging or peddling wares, and more children with shoeless feet. I’m told that a third of the country lives on less than $1 per day here, which is mind boggling. The country has suffered much from its history of war and Pol Pot’s tyrannical reign, during which an estimated 2 million Cambodians were either killed, starved to death, or died from disease. Many of those slaughtered were the country’s educated because those who had wealth and/or education were deemed tainted by capitalism and a threat to the Khmer Rouge’s view of a utopic agrarian society. Just over three decades have passed since that horror, but it will take many, many more before the literacy rate improves and the rich Cambodian soil is unburdened by the unexploded land mines that were indiscriminately planted by the Khmer Rouge.

Even with this history of strife and unspeakable sorrow, the people here have earned their title as “the land of smiles.” They are beautiful; warm, welcoming, and friendly. I’ve only just arrived and Cambodia has won my heart.