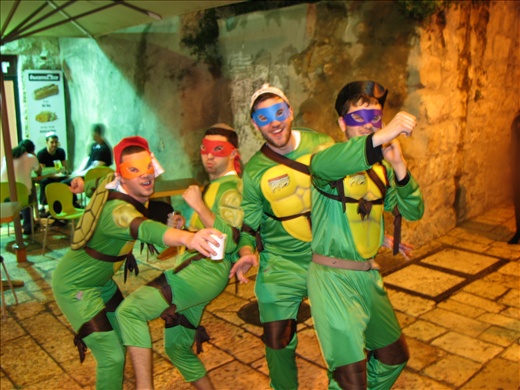 I think many travelers know what a treat it is to experience, first hand, how a culture celebrates a holiday—even if it isn’t a holiday that is celebrated by your own religion or home country. As luck would have it, we’ve arrived in Israel just in time for Purim, a colorful Jewish holiday that seems to have the the best of all holidays rolled into one. Purim (which is Hebrew for “lots”) commemorates the deliverance of the Jewish people from extermination, the story of which told in the Book of Esther in the Hebrew Bible. According to the story, Haman, a Prime Minister of Persia in the 5th century BCE, drew lots to determine the date upon which all of the Jews in his kingdom would be murdered. His plan was foiled by Esther and her cousin, Mordecai—and instead Haman, his sons, and 75,000 of the Jews’ enemies were killed.

Those who celebrate the holiday do so by attending synagogue to hear a raucous reading of the Book of Esther (I’m told that people bring noise makers to drown out the name of Haman when it’s spoken during the story), dress up in costumes, enjoy celebratory meal and drink, give gifts of charity, and exchange food and candy. It’s because of the costumes and candy that many people compare the holiday to Halloween. While I can see why this comparison is made, I think Halloween pales to the richness of Purim, not only because there seems to be many more layers to the Purim celebration, but also because of the historical and religious significance of the holiday. For our Purim celebration, David and I purchased small costume items so we would be properly attired, and then shared a delicious Purim meal with his family. Afterward, we took an evening walk in the older part of Jerusalem (the ‘Old City’) to see the Western Wall (some may remember this as the “Wailing Wall”). Despite the rain (what?! yes, rain…there had been a drought until we arrived), it was a lovely night to roam around the old city because the weather and the holiday kept many people indoors, so we were able to enjoy it without the crowds. Crowds or no, we did run into the Teenage Mutant Ninja Turtles, and isn’t that what everyone expects to run into when in Jerusalem’s Old City?