Making our way to Tel Aviv 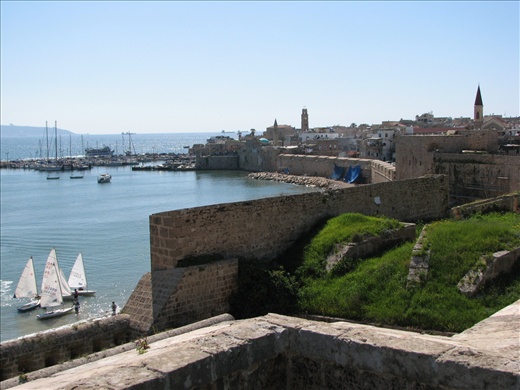 After leaving Jerusalem, we headed into Palestinian territory as we made our way through Jericho and north to Galilee. We had an interesting (but not unpleasant) experience at a checkpoint when we were “randomly selected” for a full car search, complete with mirrors to check underneath the vehicle for bombs. I suspect the recent bombing in Jerusalem has something to do with that, but I understand it is also the checkpoint’s proximity to the Jordanian border. Regardless, on that day, their “random” searches seemed to be targeting foreigners.

David made arrangements for us to stay at a permaculture farm in a moshav. Traditionally, a moshav is a small agricultural settlement where all residents contribute in some way to the community. The permaculture farm, Yarok Az, is run by a very tall, very buff ex-IDF security guard who used to protect the Prime Minister (the chef at a nearby restaurant referred to him as an Israeli “James Bond”). Now, he just trains IDF soldiers and runs his farm, which has goats, rabbits, chickens, various types of produce, and two cozy geodisic domes with wood-burning fireplaces that are available for lodging. Surprisingly, we actually needed the fireplace because we were hit with a massive thunderstorm which unleashed itself just as we arrived in the area. We were treated to the deafening sounds of rain crashing upon the dome, punctuated by occasional blasts of thunder and flashes of lightning.

After the farm experience, we headed to the town of Safed (or Zefat, depending on which map you consult), which is an old artist town near the Sea of Galilee. Here, we met up with David’s family one last time to share Shabbat with them before making our way to Akko—a city known for its fortress ruins that date back to the Crusader period—and then finally to Tel Aviv, where we will relax, enjoy the beach, and where I will have my first surf lesson, courtesy of David (who happens to be a talented all-around sportsman). I understand that some of the rockets launched by the Palestinians in the latest Gaza attacks have reached as far as the southern part of Tel Aviv, so we’re thankful that we’re staying a little further north. To see people carry on with their lives here, you’d think Gaza was on another continent instead of only 44 miles away. It makes me wonder how we would react if something similar happened so near to our own homes. I can’t help but think that things would be a bit more, I don’t know, frenzied. I find the whole thing perplexing, but I can only assume that I’m missing something because I’m a foreigner. Or perhaps this is simply a byproduct of living in a country that is in a state of constant conflict. Maybe the fact that I find this noteworthy says more about me than it does about Israel.