Finally, the weather turned in our favor again and we were able turn our attention to cycling. Yesterday we rode from Tainan to the coastal town of Anping and had such a great time that we neglected to do any sightseeing and opted instead to stay on our bikes. Today, based on a rental guy’s recommendation, we took a train north to the small village of Hoebi to cycle through some choice countryside.

Now, many people who know me know that I’m a road cyclist. While I’m relatively new to the sport, I am avid enough to own four bikes (five, if you count the mountain bike)—and oodles of cycling accoutrement. So, when my friend Jared (who is also a road cyclist) first invited me to Taiwan and suggested we might do some cycling, the thought bubble that appeared over my head contained romantic images of me racing through Taiwanese countryside on a fast road bike. The images were strong enough that I asked what gear I needed to bring—my own shoes and pedals? Jared’s reply was that a) I needed to adjust my expectations and b) the handlebars are mostly flat. So, in my imagination, I was on a fast road bike with flat handlebars.

Turns out that wasn’t quite right, either. First, let me say that Taiwan has an amazing cycling infrastructure—not only in terms of an expansive network of bike paths, but also overall cyclist awareness, which is absolutely essential to feel safe when you’re cycling in a foreign country. When it comes to bike rentals, however, unless you find a specialty shop that has exceptional gear (and I’m sure those exist somewhere), then the reality is nowhere near the sexy road bike in my imagination. Instead, the options are twofold: a hardtail mountain bike (if you’re lucky) or the more common Dutch single speed, both of which are offered in “one-size-fits-all,” which everyone knows is “one-size-fits-none,” especially when the seats won’t stay in a position higher than a tiny Asian would require. 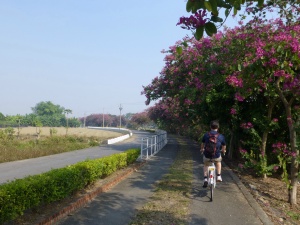 That said, today we cycled through beautiful countryside on our matching, ill-fitting Dutch bikes. If you’re not sure what kind of bike I’m referring to, imagine the kind with handlebars that are curved toward you as though they want to give you a hug. Then, subtract gears and add flat pedals, chain guard, rear rack, wicker basket, and a huge bell on top that’s big enough for a sticker that says “I love my bike.” That is a Dutch bike. The cyclist in my imagination went from yelling “whooooeee!” at high speed to “doe-di-doe…,” which is the only sound one can make while toodling around on such a bike. Dutch bikes are simply not made for “whooooeeee.”

Nevertheless, after so much time on foot, we relished our time on the bikes and the Hoebi scenic bike route did not disappoint. We meandered on the well-paved bike path and lost ourselves in miles and miles of lush, green farmland. Before we knew it, it was time to catch our train and we had seven miles to go in a headwind. Who could imagine that a Dutch bike could go so fast? We flew those last seven miles, me bent over my handlebars to make it slightly more aerodynamic (can you even say ‘aerodynamic’ and ‘Dutch bike’ in the same sentence?), my wicker basket bouncing, my chain guard clattering away, and clearly going faster than that bike was ever meant to go. We made it with ten minutes to spare.

One thought on “Doe-di-doe (subtitle: “Cycling in Taiwan”)”