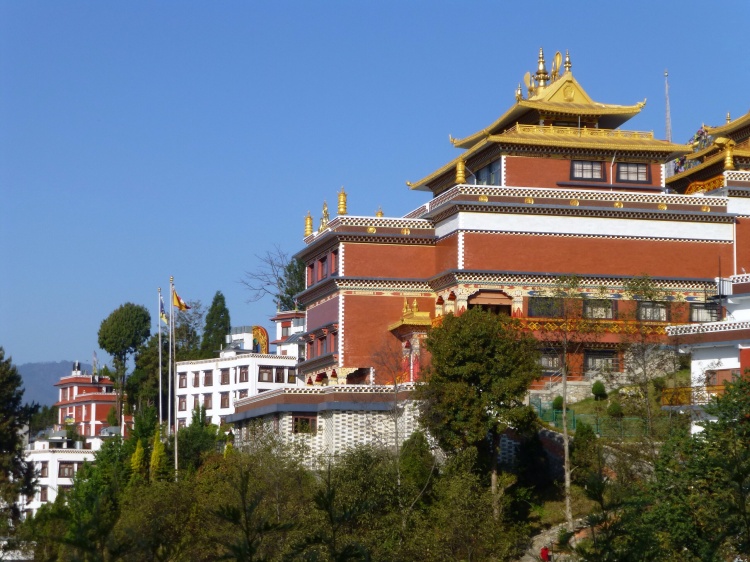 Time moves slowly at the monastery. This is proof that the adage “time flies when you’re having fun” isn’t always true, for I’ve enjoyed every day, yet my three weeks here have felt like a few months. Perhaps time slows here because even though each day is full, there is a notable lack of stress. Or maybe it’s being in a place that has such a singular focus, rather than an “outside” life in which many things from different directions compete for our attention. Maybe it’s the isolation. Or maybe it’s because everyone here has endeared themselves to me so completely in so short a time.

As I got to know the monks, I discovered they love to tell jokes and tease. I cannot count the number of ridiculous falsehoods I’ve been told just to see my reaction (“I am famous football player, miss!” or “My father invented computer in Nepal!” or my personal favorite: “Don’t listen to him, miss. He was kicked by a donkey.”) I learned to question anything that seemed even slightly out-of-the-ordinary—and from certain monks, I question half of everything they say. When I told them this in my 6th period class—a class that has a particularly lively bunch of jokesters—they were surprised that I was so generous and said the previous teacher only gave them credit for being honest five percent of the time. My response was that I am being positive, which is something they understood. Seeing the good in things is what they’re taught to do.

Sometimes they’re just plain funny. One day, as I was leaving puja and heading toward the area where everyone keeps their shoes, Tenzin (one of my favorite monks) pointed at the floor and said “Your shoes are there miss!” I looked where he was pointing and there on the floor were a pair of massive hiking boots clearly meant for a man with very large feet. I burst out laughing. I love their playful sense of humor.

There have also been sweet moments. One small, shy monk named Karma ran up to me one day to give me a beautiful bloom that he picked after climbing a rhododendron tree (rhododendrons grow wild here, so they get as large as trees). On another day, as I was on my way to class, I heard Karma yelling “Miss! Miss!” from the level above me as he ran at high speed and then down the stairs to catch up with me. As he approached, I suddenly realized I had forgotten my books in my room. I apologized to him and then went back up seven flights of stairs to retrieve them. When I returned, to my surprise, he was still patiently waiting for me. I thought perhaps he wanted to talk to me about something or ask me a question, so I started a conversation. He shyly smiled and answered my questions, but I finally realized that he was content to simply be with me. He just wanted to walk with his “miss” to school.

Perhaps the sweetest day of all was also one laced with the bitterness of leaving. Yesterday was my last full day of volunteering—which also happened to coincide with a talent show organized by my fellow volunteer, Aksana, an artist from New York. Before the show, I went to my normal classes and was surprised by each class staging a separate goodbye party within their class period, complete with snacks, gifts, prepared speeches thanking me for my work and praying for my long life, many katas (ceremonial scarves given as a token of respect), and even singing. The students even got me to sing—a sure sign of how deeply fond I am of them. It was like we had our own private talent show just for each class (or as one student put it, “just for our miss!”). I confess I was moved to tears throughout the day, not only when each of my classes put on their parties, but also when I was asked later that day to say a few parting words to the students. What could I say? How could I truly convey how much my time at the monastery meant to me? All I could say was that I’ve had some really great volunteer experiences, but none that moved me as deeply as this one—and it was because of all of them. And then I thanked them deeply for the experience. They clapped joyfully, but the words fell far short of what I wanted to say.

I don’t think there is a way to capture the entirety of an experience with words. All I ever do is share snippets and anecdotes, which only scratch the surface and doesn’t get at the heart of an experience. Indeed, time certainly moves slowly at the monastery…but I am so glad it did.

Colleen Finn is a globe trotting, sight seeing, day tripping, frequent flying traveler with a penchant for voluntourism.
View all posts by colleen finn »
« A day in the life of a monastery volunteer (Part 2)
Pokhara and bandhs… »