The mountains are calling… 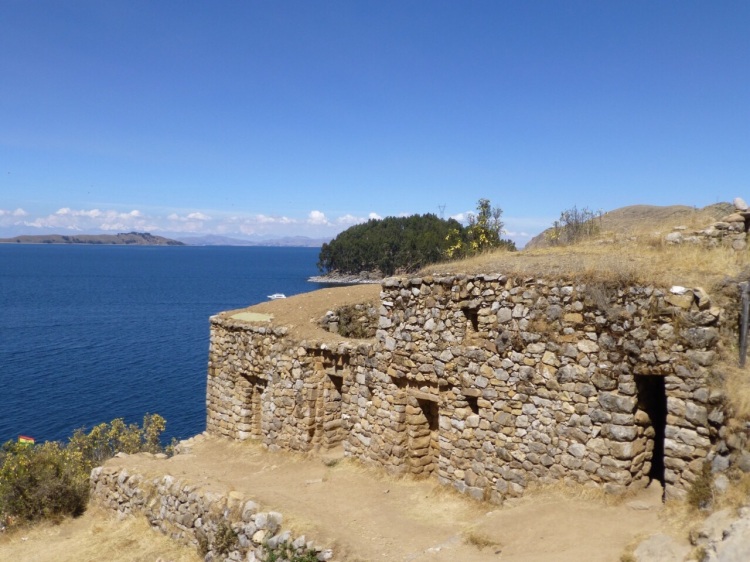 An Inca ruin on the Isla de la Sol

Up until now, I’ve used my weekends to play tourist, eagerly leaving the big, cacophonous city to encounter something quieter and more laid back. “Cacophony” in a large South American city is not like what you’d hear in a similarly sized city back home. Here, it’s the multilayered din of grid-locked cars honking because they think that might help them move faster; feral dogs barking as they roam the streets in search of their next meal; the gas man playing music through a loudspeaker to announce his presence (much like the ice cream man back home, but not nearly so sweet); and street vendors calling out to entice you to buy their wares. Oh, and let’s not forget the occasional layer of my downstairs neighbor drilling and powersawing as he makes repairs in his apartment…past 8pm.

While I cannot deny there are many benefits to making a large city my digital nomad home-base (e.g., fast Wi-Fi and power adaptor purchases are just two good reasons), you can understand why I’ve looked forward to getting out of the city each weekend. Aside from the Salar de Uyuni excursion, I went to Copacabana—a small town on the shores of Lake Titicaca—and the Isla de la Sol, which is an island in Lake Titicaca believed by the indigenous populations to have been the birthplace of the sun, as well as some notable Incan deities. This weekend I was planning a hike in Palca Canyon to kick off the actual “vacation” part of my trip, but my plans were thwarted by the promise of storms. So, it seems I will be spending my first full weekend in La Paz since I’ve been here…and will have to learn to embrace the noise.

It’s hard to believe that I’ve officially finished my last week of work in La Paz. I relish trips like this one, in which I get to experience living more like a local, staying in one place, cooking for myself, taking a leisurely pace at seeing sights. During my time in the apartment, I was able to ease into a lovely routine, got a lot of work done, made a new friend, and explored both in and outside of La Paz. I also found the best coffee in town (this part is crucial, particularly since Bolivia exports its best beans and drinks a far inferior brew locally), and discovered the sweet pleasure of alfajores (why had I never tried them before?! My life has been a hollow shell.) More importantly, my little digital nomad experiment was a big success, so I see no reason not to do this again in the future. Maybe it will help keep my wanderlust at bay for just a little while I’m working a normal job with normal (i.e., short) amounts of vacation time.

Some of you may be interested to know how the high-altitude cooking experimentation went. Well, I’m happy to tell you that I learned the trick of quinoa and rice and that is this: spend all day at it. Not literally, but soak it for several hours, then cook it according to the normal ratios. I imagine this method would have worked fine for lentils as well, if I had tried them again (which I didn’t). 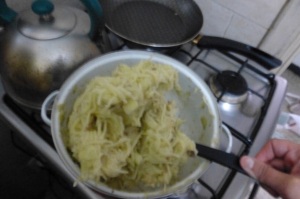 …But then there was pasta. The markets are full of pasta, leading one to believe that people eat a lot of it here. So, I decided to give it a try. I bought several expensive imported ingredients for my pasta test…which should have been a clue that things would not go well. I cooked the pasta according to high-altitude directions, continuously tested it for doneness, then started to notice it was getting a bit gummy. Worried that I was overcooking it, I poured out all the water and proceeded to toss it in my white sauce mixture and before I knew it, I had a solid mass of pasta. “Solid” as in: I-can-lift-the-whole-mass-with-one-spoon solid. If pasta was acceptable in the form of a dense stringy pudding, then this could have won the Betty Crocker award for high-altitude cooking. Alas, it is not, and I just couldn’t stomach it. This is the one failure that I couldn’t bring myself to eat.

So that was that. The good thing is I’ve managed to stay healthy so far, which I attribute to the fact that I’ve (mostly) cooked for myself. However, now that I am about to embark upon the actual “vacation” part of my digital nomad adventure, I will no longer have the luxury of managing my cooking environment; thus, I am now at the gastronomical mercy of others. I pray that Bolivia takes pity on this poor, easily sickened soul.

That said, after this weekend, I leave the cozy (but loud) confines of my apartment, transfer myself to an equally loud hotel, and then escape all of the commotion as I begin my Cordillera Real adventure—a week-long trek during which I will have no access to Wi-Fi, let alone anything else. The mountain range hovers above and beyond the rim of the “bowl” that is La Paz and you can see it from several vantage points in the city. It looks extraordinary—covered with snow and beckoning, inviting me to explore its wonders up close. I shall “see” you all at the other end of it.

As John Muir said, “The mountains are calling, and I must go.”