When we stepped off the plane in El Calafate, I was immediately struck by the cold, dry air. After six weeks in Buenos Aires’ subtropic humid weather (where it always felt about 10-15 degrees warmer than it actually was), it was a refreshing change to be immersed in the cold arid steppe of Patagonia. I think of warm vs. cold weather like this: there’s a limit to how much clothing you can remove and still be within the realm of decency; however, when it’s cold, you can always add more clothing. I can work with cold.

The other thing that I noticed immediately was the quiet. Oh my goodness, the stark contrast of Buenos Aires to El Calafate simply cannot be described. It’s the sort of thing that made me close my eyes, inhale a lungful of fresh glacial air, and then exhale slowly as the stress and tension blew away with each puff of breeze. My mind stopped racing (as is its wont) and I felt more at ease and in harmony with my surroundings than I did in the bustling, cacophonous city. I thought I needed a day spa, but what I really needed was this. Nature truly is the balm for all that ails.

El Calafate is a quaint little town most known for its access to several magnificent glaciers in the Los Glaciares National Park. David and I booked a day trip to visit the largest, Perito Moreno, which is slightly bigger than the city of Buenos Aires and easily accessible via ferry, making it the most popular glacier to visit for day-trippers. Perito Moreno is also unique in that it’s one of the few glaciers that maintains equilibrium—it gains mass as quickly as it’s lost. The day started with a visit to the Perito Moreno “balconies,” which is an elaborate series of decks that get visitors close enough to the glacier to see it from a multitude of angles. Then, we boarded a ferry to the glacier itself and hiked upon its surface (with the chunkiest crampons I’ve ever worn), admiring the seracs, the deep blue glacial pools, and the sound of glacier pieces breaking off, which are like little explosions going off in the distance. The day was magnificent and refreshing.

El Chalten—the “trekking capital of Argentina”— is a little village that was established as recently as 1985 to support the country’s trekking industry because of its vicinity to the most popular hikes this side of Patagonia.

We rose at the crack of dawn to do the Laguna Torres hike to avoid any hiking crowds. It was a frigid 27F degrees, which was effective in clearing the little bit of sleep from my head. The sky was perfectly clear and as we started on our path, we enjoyed the amber glow upon the mountains as the sun began to make an appearance. The trail was just as I remembered from my experience in Torres del Paine last year: rolling hills with bits of rock thrown in for good measure. It felt exhilarating to have my feet on a Patagonian trail again and I felt energetic and buoyant in the impeccable weather—which, despite the cold, featured deep blue skies with fluffy clouds high overhead. The trail culminated at the rocky edge of Laguna Torre, which reflects a view of Cerro Torre upon its surface as random chunks of ice lazily lounge upon the water. Today’s hike was everything any trekker could hope for. Perfection. 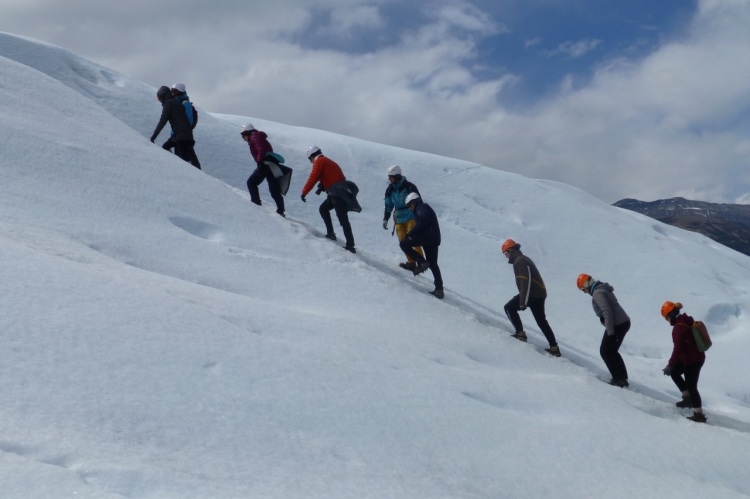 The wind was gusting so loudly during the night that it woke me at 3 am and I couldn’t return to sleep. My lizard brain immediately clicked into survival mode and entertained the notion that perhaps we shouldn’t hike. Sure, today’s hike is thee signature hike in El Chalten and we came all this way to hike it, but BAD WEATHER. Thankfully, David—the king of “there’s no such thing as bad weather”—is here to keep me moving. We dutifully get going at the crack of dawn, step outside, and ohmygod, that’s some serious wind. But no worries, it’s just wind.

We get on the trail and aside from occasionally being blown off balance, it isn’t completely terrible, particularly in areas that are less exposed. About an hour or two into the hike, it begins to rain. At first, just a light occasional sprinkle, but as we plod along the trail, it gradually becomes more consistent. Nevertheless, we soldier on. Just when I’m starting to feel really cranky, David is ready with a well-timed “I think we’re doing awesome, what do you think?” I had to laugh.

Finally, we reach the last kilometer before our target viewpoint, which is marked by warning signs that clearly state that the trail is steep, rocky, and inadvisable if there is rain, snow, ice, or wind. We have two out of four. Again, the lizard brain kicks in and secretly wants to call it a day, but I don’t want to be the one that suggests it, so I ask David what he thinks. He replies “of course we’re going up.” The man is impervious to bad weather. To be fair, other hikers are going up, so it’s not like we’re alone in this decision. So, we embark upon the trail, which is 1500 ft of elevation gain squeezed into one kilometer on a rocky trail that is the worst we’ve seen in the area. We were told it would take an hour to climb, but that must have been measured in good weather. We slowly climb up and as we do, the rain gradually turns into little snow flakes, which then turns into a curtain of sleet blown sideways by the wind.

By the time we get to the high point of the trek, the sleet is blowing so hard that it’s stinging my face. Our photo opportunity—which is supposed to be Fitz Roy towering above a glacial lake that reflects the massif upon its still, blue waters—is obscured by snow and clouds. All we can do is take shelter behind a massive boulder to eat a quick lunch, take a few pictures, then begin our descent. Naturally, the way down is harder than the up, but at least the sleet begins to transition back into rain. As we make our way back to civilization, the precipitation slowly dissipates even as the wind gains in strength (at one point gusting so hard that we were forced into a crouch because it was impossible to walk against it). However, eventually the clouds broke, giving us a taste of the blue sky and the sun upon our faces. Incredibly, I had to apply sunblock in the last two hours of our hike. It’s true what the locals say: if you haven’t experienced all four seasons in a day in Patagonia, then you really haven’t experienced Patagonia.

Colleen Finn is a globe trotting, sight seeing, day tripping, frequent flying traveler with a penchant for voluntourism.
View all posts by colleen finn »
« Uruguay and the trouble with Chile…
Patagonia: Ushuaia »

One thought on “Patagonia: El Calafate and El Chalten”