Several years ago I was in Thailand and had high hopes that I would experience it by unhinging my jaw and inviting all the food to jump in and have a party. I was sorely disappointed when I found myself with very little appetite—a side effect of the oppressive heat and humidity. Here in Taiwan I am blissfully voracious, it’s as though the travel gods decided a do-over could be granted and Taiwan was the place. Taiwan is a food-lover’s paradise, with open air markets, restaurants at every turn, and smells that range from delightful to detestable. So far, we’ve eaten well and been open to experiencing everything that takes our fancy. This includes both the unknown and the known—such as the hot pot we had for lunch the first day that was like a steaming hot bowl of “Bertie Botts Every Flavor Beans,” which for you non-Harry Potter fans, is like saying that you may get a delicious flavor of pink grapefruit in your mouth, but you may also get a mouth full of ear wax. The pink grapefruit of our hot pot: beef, tofu, cabbage, and straw mushroom all infused with the flavor of the savory broth. The ear wax: a soft, chocolate-colored cube that tasted faintly “meaty” to me and which we later discovered was duck blood tofu. Or the off-tasting and very pungent square of stinky tofu, which seems to be a real favorite here, judging by how often you get hit by the smell (but really, it doesn’t taste nearly as bad as it smells; then again, being half Asian, I’m not sure I am a fair judge of stinky or off-tasting).

Later in the evening, we browsed through Shilin night market, had “vegetarian dumplings” that clearly had little cubes of pork (note to vegetarian travelers: the meaning of the word “vegetarian” is sometimes applied to things that simply have more vegetables than their counterparts), then finished off the evening with Yakitori, which was definitely more familiar, but included things like chicken skin and chicken heart, based on my friend Jared’s own tastes. I’ve never had heart of anything before, but I had nibbled on duck blood tofu earlier in the day—the heart was delicious. 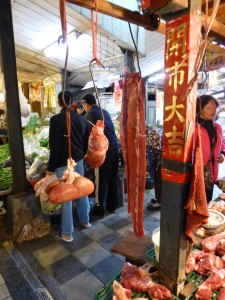 Meat in the market. I believe this is liver, heart, and intestine…

And the tip of this horn of plenty? The coffee here has been heavenly, even if we did encounter a barista who refused to provide us milk for our Americanos—and not because they didn’t have milk, but because milk simply could not be added to an Americano. She explained this to the thick-headed Americans (after whom the Americano was named), all while diminutively giggling and being completely polite and adorable. You want to be annoyed, but you just can’t. I could get used to this place.

One thought on “Taiwan’s Horn of Plenty”