Of haunted hotels and serious sightseeing…

I confess that aside from the thrill I felt after booking my plane tickets, my first jolt of excitement came when I heard we’d be staying at the Grand Hyatt in Taipei on the first part of this trip. The Grand Hyatt is one of the top-10 most haunted hotels in the world. Imagine: a haunted hotel! Apparently, the hotel was built upon the site of a WWII prison camp where, tragically, many were executed. Please don’t think me horribly callous to the suffering of those who lost their lives, but I was ecstatic at the idea that I might actually experience something supernatural—and the TripAdvisor reviews I read indicated it just might happen. The spirits of the executed are reportedly very restless and as a result, feng shui experts were called upon to fill the hotel with artifacts intended to keep the spirits at bay, such as chimes at the hotel entrance and special Chinese calligraphy throughout the hotel. According to what I’ve read, the locals will not stay at the Grand Hyatt, but as far as I’m concerned, they may as well camp in the hallways because we neither saw nor felt any sign of ghosts. If effort counts for anything when it comes to the supernatural, I was trying really hard too. Each night, I strained to hear an ethereal noise from another dimension, see the hazy image of a ghostly figure, or even feel a feather-light touch of a spectral finger upon my brow (all while ready to reach for my ghost-busting proton pack, which I keep for just such occasions), but alas…nothing. Not a peep.

Thankfully, that’s been my only disappointment in Taiwan so far. Aside from eating and ghost-searching, we’ve been filling our days with some serious sightseeing, which has included (in no particular order):

Longshan Temple – A bustling, multi-denominational temple that dates back to 1738 and is packed with people making offerings and lighting incense. 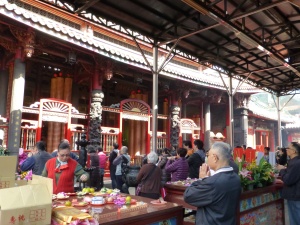 The bustle of Longshan Temple

Guandu Temple – This one is a bit farther afield, but well worth the visit and easily my favorite temple thus far. The Guandu temple, which dates as far back as 1661, is built into a hillside and surrounded by a nature reserve. The manicured grounds above the temple offer a breathtaking view that includes the river and wetlands below.

The view from the grounds of Guandu temple

Din Tai Fung – okay, this is not a temple or a memorial, but it really is a must-visit in Taipei. It’s a restaurant that serves some of the most delectable dim sum ever to grace my taste buds. The dumplings are a must—little pillowy balls of dough filled with meat or vegetables. I imagine many an eager customer has scalded their mouth on these things, because the waitstaff gives you a little card with instructions on how to eat them properly—you dip it in a bit of ginger sauce, plop it in your oversized spoon, puncture the dumpling so all the hot juices come flowing out, then slurp it all down like an oyster shooter. Heaven.

Taipei 101 – This is one of the world’s tallest buildings, which looks deceptively short when up close, but clearly towers above all other buildings when seen from afar. The main floor has a plethora of sweet shops and bakeries as well as one of Din Tai Fung’s locations.

Maokong – This hilly area on the outskirts of Taipei is known for its tea houses. It’s a lovely, calming place to have a nibble and enjoy the tea for which this area is well known—all while overlooking the lush, green hills and the city of Taipei in the distance. We took a small hike up to the Zhinan temple (yet another beautiful spot), then rode a gondola back to the bottom.

National Palace Museum – Definitely a must-see as this museum contains a massive collection of China’s best art; however, if you’re even a little bit claustrophobic (like I am), make sure you take a deep breath, draw upon your inner Buddha, and then hold on to that Zen vibe throughout your visit. This place is packed with tour groups and other museum browsers who descend like a swarm of locusts around the most popular treasures, completely oblivious to people who are already there. Prepare for some serious jostling. Deep breaths!

I can see this is already a long list, so I will stop here so I can treat myself to a massage—sightseeing is exhausting work.